In Côte Saint-Luc, Que, those who don’t follow the bylaw risk fines of up to $500.

Most other authorities, such as the Ottawa and Toronto transit authorities, say they plan to focus more on education than penalties.

That said, both Côte Saint-Luc and Wellington-Dufferin-Guelph are asking businesses to bar people without masks from entering.

Cara Zwibel, director of the fundamental freedoms program at the Canadian Civil Liberties Association, is concerned about that: ” I don’t know if we want our bus drivers and our grocery cashiers to be interrogating people about their health status to try and decide who can get an exemption and who can’t.”

Zwibel said she thinks mask rules put people such as transit drivers in “a really difficult position” especially given the confusing language around enforcement.

“If you announce a policy that something is mandatory, it’s a bit odd in the same breath to say that you’re not going to enforce that… I think that kind of announcement confuses people a lot, and it’s not really helpful.”

Zwibel is also concerned about people with disabilities, such as hearing impairments, who need to see people’s faces to read their lips or people on the autism spectrum who may have trouble with masks.

Kate Mulligan, an assistant professor at the Dalla Lana School of Public Health at the University of Toronto who studies health policy and equity, shares those concerns.

She said people with breathing difficulties, such as asthma, may have trouble with masks, and certain groups, such as Black and Indigenous men, may face discrimination when wearing a mask. “They may be perceived as a safety risk, and that could create a safety risk to themselves.”

She said exceptions to mandatory mask policies are needed for that reason. “And I think it takes a lot of capacity to do that kind of enforcement.”

The lack of enforcement capacity has been cited by officials in Quebec and Ontario as a reason why they’re reluctant to make masks mandatory. 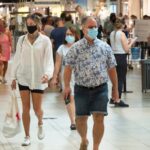 Where in Canada are masks mandatory so far?

Are there other concerns about mandatory mask laws? 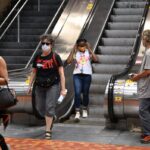